This post is part of an ongoing series featuring items recently cataloged from the Julio Mario Santo Domingo Collection. 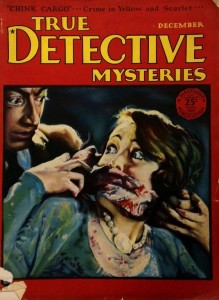 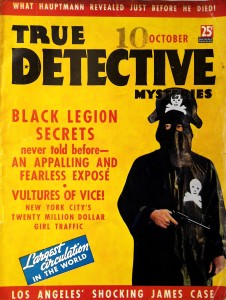 True Detective Mysteries, called True Detective starting with its October 1939 issue, was a magazine about crime and criminals published for over 70 years. Beginning in 1924, it was often regarded as the first true crime magazine, launching the pulp magazine genre. It was jump started by American publisher Bernarr Macfadden , often labeled as an eccentric health enthusiast claimed to have buried part of his fortune in steel boxes across the United States. 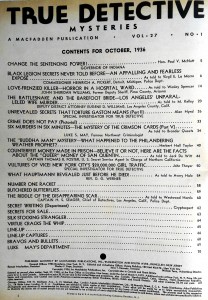 Initially publishing fictionalized accounts of true crime, the magazine soon saw merit in reporting straightforward accounts of police investigation and the closing of particularly gruesome or sensational cases. This course of action was a hit, inspiring some 200 titles in the pre-World War II era, with True Detective itself reaching a circulation of two million. With our modern view of pulp as somewhat lurid, readers may be surprised to know that high end true crime magazines like True Detective initially turned away from hypersexualized crime stories, and were popular across the board, garnering support from J. Edgar Hoover himself. 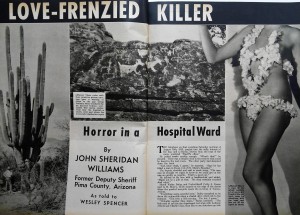 In the post-war era, True Detective and its competitors moved further into the realm of the taboo, with stories becoming increasingly graphic both in language and the photographs used to illustrate them. At the height of the counterculture movement, during the late 1960s and early 1970s, True Detective joined its cohort in a new and extremely graphic focus on violent sexual crimes. Covers reflected what many remember of pulp today—terrified, nearly naked women often bound and gagged, fighting for their lives against shadowy criminals. These extremes did not hold reader interest, however, and by the 1980s this once booming genre was reduced to two publishers and eleven titles. Although interest in true crime did not wane during the 1980s and 1990s, the genre moved on to film and television, and True Detective ceased publication in 1996. 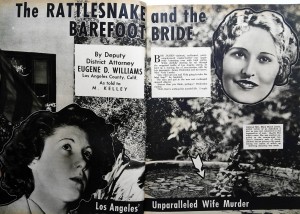 With true crime experiencing new popularity through podcasts such as Serial and television programming like Making a Murderer and The People vs. OJ Simpson, it is interesting to compare these new forms of investigation with their counterparts from nearly a century ago. Click here for a more detailed account of the rise and fall of True Detective magazine. To see inside more issues of True Detective and other pulp magazines, see the Pulp Magazine Archive hosted by the Internet Archive.

Thanks to Irina Rogova, Santo Domingo Library Assistant, for contributing this post.