Not long ago, Houghton Library acquired a copy of the first half of an edition of the works of Thomas Aquinas printed in Basel by Michael Wenssler in 1485 (Inc 7508) – the first half, I say, because the collection was issued in three parts, of which the second itself consisted of two parts, and the Houghton volume contains part one and the first part of part two.

The Houghton volume is in a contemporary binding, with a title label and separate shelfmark label on the front cover, and the title of each part written boldly along the bottom edges.  There is a neat inscription, inside the counter of the first red and blue puzzle initial, identifying its original owner as the Carthusians of Würzburg. 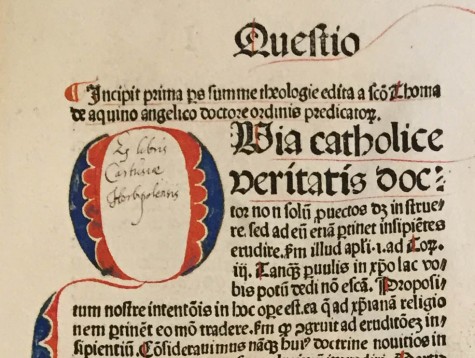 Initial with inscription from Houghton Inc 7508. 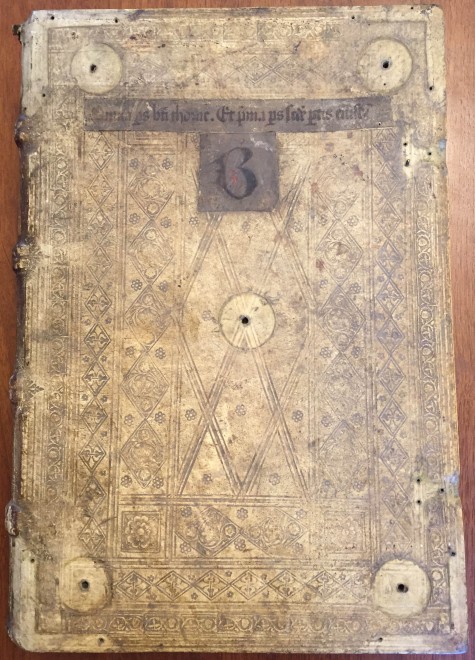 As part of a larger project to enter provenance information about Harvard incunabula in the international data base Material Evidence in Incunabula (MEI), a project of the Consortium of European Research Libraries (CERL), about which Alicia Bowling has recently written on this blog, I examined the volume.  As I generally do when faced with an incomplete copy of a work issued in more than one volume, I looked over the holdings listed in the British Library’s census of incunabula holdings, the Incunabula Short Title Catalogue (ISTC), for other incomplete but complementary copies, in hopes – which are generally vain – of finding one that had earlier been the mate to the one in hand.

In this instance, I found no copy with an exactly complementary volume, but a number designated simply as “imperfect”.  Two of those, however, were owned by the Universitätsbibliothek Würzburg, and a quick look at the Tübingen database of incunable holdings of major German libraries (INKA) provided the information that one of the Würzburg incomplete copies also had Würzburg Carthusian provenance, similar rubrication, a similar binding (the description mentioned that marks of title and shelfmark labels, no longer present, were on the front cover), and most tellingly, that their copy had the titles written along the bottom edges.

An inquiry to Falk Eisermann of the Gesamtkatalog der Wiegendrucke led immediately to Angelika Pabel, who had catalogued the Würzburg 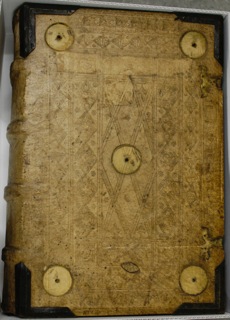 incunabula (and written about Würzburg bindings).  Since she is now retired, she forwarded my inquiry, complete with images, to a colleague in the library, Cora Collon, who soon replied that indeed the Houghton copy of I/II.1 matches in binding, inscription, rubrication, and titling their copy of II.2/III (call number I.t.f. 365) – as the accompanying photographs demonstrate.  Further, their cataloguing identifies the bindery as that of the Würzburg Carthusians.

Front cover (above right) and bottom edge of Würzburg I.t.f. 365. Courtesy of the Universitätsbibliothek Würzburg.

The books in their library were largely transferred to the university library when the monastery was dissolved in 1803, and it is now impossible to determine why or how the two volumes became separated.  But the volume now in Houghton was acquired by Ampleforth Abbey in Lancashire, quite likely about the time of its founding in 1804 (different stamps and a bookplate from various periods are found in three places), and remained there until consigned to Sotheby’s by the abbey in 2010, whence it came (through the agency of Christopher Edwards) to Harvard.