This post is part of an ongoing series featuring recently cataloged items from the Julio Mario Santo Domingo Collection. 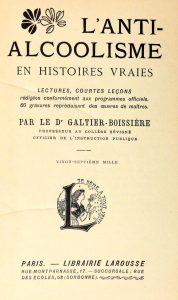 L’antialcoolisme en histoires vraies is a volume that deals with the history of alchoholism and the various effects on all of society.  Crafted as lectures and lessons that go with official programs it was written by Dr. Emile Galtier-Boissière.  Galtier-Boissière is probably most well known for his work on Larousse medical illustré de guerre, which is an illustrated guide to medical care during World War I.  The illustrations throughout this volume dealing with alcoholism are particularly sensational and most likely hope to shock the reader with the effects of alcohol on people’s health and subsequent lives.

There is an entire chapter about the effect alcoholics and alcoholism has on the family.  For example this depiction of a woman clutching her baby in her arms while her husband is stumbling 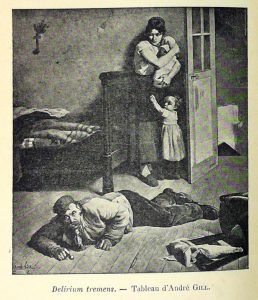 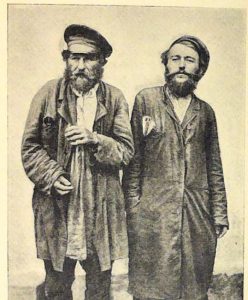 and drunk knocking furniture around their house is an indictment of the dangers of drinking.  There is also a visual of how alcoholism can change the health and appearance of a person.  In the later half of the 19th-century alcohol consumption in France was quite low compared to other countries like Russia and Sweden.  However by 1900 the average amount of what a person was drinking was sharply up so France launched an aggressive anti-alcohol campaign and managed to get it down from 4.88 liters per inhabitant to 3.76 liters by 1906.  You can see this reflected in the graphic in the volume which includes representations of the countries laboring under the weight of alcohol. 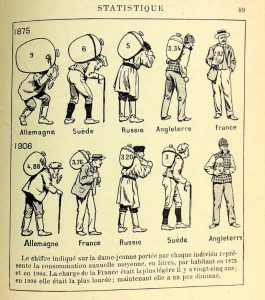 Thanks to Alison Harris, Santo Domingo Project Manager, for contributing this post.