“50 Centuries of Service to Mankind”

This post is part of an ongoing series featuring items recently cataloged from the Julio Mario Santo Domingo Collection. 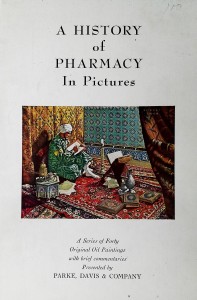 A History of Pharmacy in Pictures, a depiction of the history of the pharmaceutical profession through oil paintings, was first conceived by pharmacist and journalist George A. Bender before the Second World War. He was inspired be a series of photographs showing the history of surgery produced by Davis & Geck in the 1920s.  Despite this early conception, it would take Bender somewhere around a decade to comprise the series of oil paintings.  In 1947, Bender became editor of Modern Pharmacy, a publication of Parke-Davis & Company, once the oldest and largest pharmaceutical company in America, which was acquired by Pfizer in 2000.  Two years into this position, he was finally granted approval for a project then entitled  “Pictorial Interpretations of Pharmacy Through the Ages.”  Though his original intention was to use the the photographic reenactment technique that Davis & Geck used, Bender eventually hired Robert A. Thom, a painter.  The two worked together for nearly a decade to research the history of pharmacy to create historically accurate paintings.  Thom traveled to Europe in 1953 to visit sites he would depict in person.  Although it took Thom about a month to create each painting, approximately half a year of research went into each of the 40 works of art.  Bender and Thom covered some 250,000 miles in the span of their 8 years of research for the paintings. 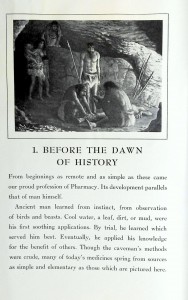 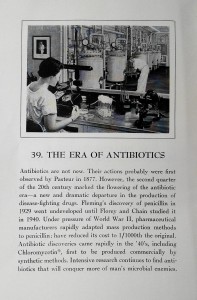 The paintings were originally published in Modern Pharmacy, then turned into window displays, and eventually shown in a variety of museums including the Smithsonian, the New York Metropolitan Museum of Art, and Hôtel des Invalides in Paris.  Pharmacists bought prints of the paintings for display in their establishments.  Although the paintings begin “before the dawn of history,” and cover medical practices in Babylon, Egypt, China, Persia, and Europe, the focus of most paintings lies with pharmaceutical developments in the United States.  This pamphlet contains all 40 paintings in black and white, along with paragraph descriptions of the time period and practices they portray.

Click here learn more about the development of this project, along with its portrayal of the pharmaceutical profession in the United States.  To see the paintings in color, please see a presentation by the College of Pharmacy at Washington State University here.

To learn more, A History of Pharmacy in Pictures can be found in Countway’s collection: Detroit, Michigan: Parke, Davis & Company, 1960.

Thanks to Irina Rogova, Santo Domingo Library Assistant, for contributing this post.