Since my old blog (still running, amazingly, on an old server somewhere within Verisign) will some day be Snow on the Water, and conversation about radio has commenced below that post, I decided to re-post March 21, 2001. Here goes…

Blast from the past

Tune in here right now to catch Larry Lujack on KNEW, the Top forty station in Spokane, Washington, in the summer of 1963. Lujack later became a legend on Chicago radio.

Such memories. I’ve been grooving back over my first visit to The West when I was a teenage radio freak with a Zenith Royal 400 transistor radio glued to my ear as my family spent the summer driving all over the country. I was a city & suburban boy from New Jersey. (Seen The Sopranos on HBO? Crank the locality back forty years and that was pretty much the environment.) 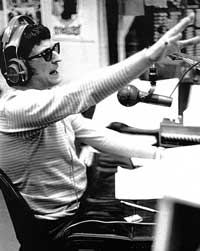 The Real Don Steele on KHJ/930

I had never been West before, and it was a mind-blower. I remember driving through Santa Barbara, where I’ve been living now for less than a week, and looking up in amazement at the buff-colored mountains, with its layers of rock shaped like fish scales or the plates on the spine of a stegasaurus, lined in dark green chapparal.

But while I loved the geography and the geology, I couldn’t get away from the radio. The land would always be here, but the golden age of Top 40 would not. In fact, it would begin to end with the assasination of JFK only three months later, then the Beatles, then FM and everything else that made The Sixties what they were. Great Top 40 was a Fifties Phenom, even though it didn’t really end until WABC went talk in the mid-Seventies.

The songs: Surf City, by Jan & Dean. More, by Kai Winding. Wipe Out, by the Surfaris. Candy Girl, by The Four Seasons. Sally Go Round the Roses, by the Jaynettes. Memphis, by Lonnie Mack. Please Mr. Postman by the Marvelettes. Just One Look, by Doris Troy. One Fine Day, by the Chiffons. What a hook that song had:

And all the great stations! In my head I can still hear KAAY/1090 out of Little Rock, which covered the midwest like a blanket every night. KIMN/950 out of Denver, which I picked up somewhere in Kansas, and listened to all the way to Colorado Springs, never closer than a hundred miles to the station itself. The signal was weak, but the ground out there was so conductive that a signal that wouldn’t go forty miles in Massachusetts carried hundreds of miles. (Check out all the higher numbers on this map here and you get the idea… there’s nothing in the East like it.) Others: KMEN/1260 in San Bernardino. KFWB/980 and KRLA/1110 in Los Angeles. KEWB/910 out of San Francisco.

I loved hearing Dick Biondi on KRLA when we got to Los Angeles in late July. This was after Dick was famously fired by WLS/890 in Chicago, a station you could hear over half the country every night (my cousins listened to him, along with everybody’s Cousin Brucie on WABC/770 from New York, every night). Right now this stream is playing the Real Don Steele, who later became huge in Los Angeles radio on KHJ/930. (Steele died not long ago and is remembered beautifully here.)

I got to looking into all this because I still cant get Dave Dudley’s Six Days on the Road — another hit from the Summer of ’63 — out of my head.

God, I love the Web.

Back to work, accompanied by Wolfman Jack on XERB/1090 (“… studios in Los Angeles” even though the transmitter was down in Rosarita, south of Tijuana in Mexico… it still booms into Santa Barbara, where it was THE Top 40 station for decades).

All your Net are belong to us

Thanks to Ev for clueing us in on the most telling paragraph in the Microsoft Hailstorm White Paper:

Microsoft will operate the HailStorm services as a business. The HailStorm services will have real operational costs, and rather than risk compromising the user-centric model by having someone such as advertisers pay for these services, the people receiving the value – the end users – will be the primary source of revenue to Microsoft. HailStorm will help move the Internet to end-user subscriptions, where users pay for value received.

I was finally able to get to Jacob Levy’s post at the MS-Hailstorm list at YahooGroups. In case it’s as hard for you to get in there as it was for me, here are Jacob’s summary paragraphs:

The most telling part of this is that none of the protocols are currently open. Of course they’ve sprinkled some magic fairy dust on the whole business by repeatedly saying the XML and SOAP buzzwords. I’m not going to hold my breath waiting for Microsoft to publish the protocol they’re implementing between the PassPort server and the American Express payment clearance server, for example. Doesn’t matter what its written in, XML and SOAP or ancient greek on papyrus, it’s not going to be open.

Methinks its time to move on beyond this venting and think what we’re going to do about this. As I said in the start of this thread today, we don’t need Microsoft to implement any of this.

Okay, so here’s an idea: let’s talk with IBM, which is busy declaring its love for Linux and its development community. They’re spending a $billion this year on Linux (not clear exactly how, but never mind). Why not plug into the larger surrounding community that embraces the Net as something that’s ours, and doesn’t need to be “moved” anywhere — least of all to a place where only one company can intermediate services (that can only be fee-based) between users who happen to be enabled exclusively by that company’s software?

Postscript: Larry Lujack died last year. Microsoft Hailstorm failed not long after I wrote this post. Dick Biondi, now 81, is still on the air in Chicago. Cousin Brucie still holds forth on SiriusXM’s Sixties on 6. KAAY fell in to disrepair and is barely on the air as a religious station. Every other mentioned station has gone through numerous format changes. Wolfman Jack died in ’95, though I didn’t make clear above that I was listening to him on the Spokane station’s stream.