Mom died ten years ago yesterday, just as I was putting up the post below. I learned a short while later that she was gone. It was a good post then, and still is now. So I thought I’d run it again. — Doc 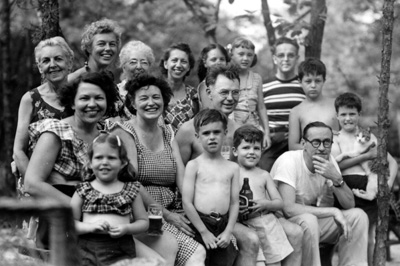 Except for school, I had a happy childhood. That means my summers were idylls.In the summer of 1949, a couple months after my sister was born and while I was turning two, my parents bought an acre and a half of land near Cedarwood Park on the edge of the pine barrens in South Jersey (near The Shore, pronounced Da Shaw), bought a small wooden building, towed it to a clearing on a flat-bed truck, sat it on a shallow foundation, built a kitchen out of cast-off boards and windows, erected an ourdoor privy over a pit, pounded a pipe into the ground for well water, screwed a hand-pump on the top of the pipe, furnished the place with garage sale items, hung a pair of Navy surplus canvas hammocks between scrub oak trees, and called our new summer home “The Wanigan,” which they said was “Eskimo” for “house that moves.” (Apparently the derivation is Ojibwa, but so what.)It was paradise. Grandma and Aunt Ethel had a place nearby. So did my great aunt Florence and Uncle Jack. Aunt Grace, Uncle Arch and my cousins Ron, George and Sue all lived in Marlboro, not too far away. They’d bunk in Grandma’s garage. Other friends and relatives summered nearby, or would come visiting from near and far, sometimes staying for weeks. Over the next thirteen years the Wanigan got an additional room and indoor plumbing, but was otherwise blissfully unimproved. We never had a TV. For years our only phone ran on DC batteries and connected only to Grandma’s house.We went to Mantoloking Beach almost every day. For a change we swam the beaches and lagoons of Kettle Creek (we had a little land with a dock on Cherry Quay Cove) or the Metedeconk River on Barnegat Bay. We fished and crabbed in small boats. On the way home we stopped at roadside farm stands, bought tomatoes and corn, and enjoyed perfect suppers. We rode our bikes through the woods to the little general store about a mile away, bought comic books and came home to read them on our bunk beds. We grazed on blueberries, three varieties of which comprised the entire forest floor. We built platforms in the oak trees, collected pine cones and played hide-and-seek in the woods. Bedtime came when the whip-poor-wills started calling. We fell asleep to a cacaphony of tree frogs and crickets.The picture above was shot in the summer of 1953, when I was turning six (that’s me with the beer in the front row), behind “Bayberry,” the house Grandma Searls shared with her daughter, our Aunt Ethel. That’s Grandma at the top left. Aunt Ethel is in the next row down next to Mom. Behind both are Aunt Grace Apgar and my great Aunt Florence Dwyer (Grandma’s sister). Then Aunt Catherine Burns, cousin Sue Apgar, Mary Ellen Wigglesworth (a neighbor visiting from back in Maywood, our home town), then Uncle Arch Apgar. In front of Arch is George Apgar. Pop (Allen H. Searls) is in the middle. In the front row are my sister Jan Searls, Kevin Burns, myself, Uncle Donald Burns and Martin Burns (who today remembers being scratched by that cat).Grandma lived to 107. Aunt Florence made it to her 90s too, as I recall. Aunt Grace is now 91 and in great health. (Here we are at Mom’s 90th birthday party last April.) Aunt Katherine is still with us too, as is everybody from my generation (now all in their 50s and 60s).I’m waxing nostalgic as I plan a return visit this weekend to North Carolina, probably for the last time in Mom’s life. I’m also remembering what late August was like back then, as we prepared to end another perfect summer. It was wanting paradise never to end — and knowing, surely, that it would.

Among those in the photo who were alive when this post went up, we’ve lost two: aunt Katherine passed several years ago, in her late 90s; and ccousin Ron Apgar, who was shy of photos when this shot was taken, died at 70 last year. The rest of us are all still doing fine — especially Aunt Grace, now 101 years old.