With racy sperm pics on a smartphone, men can easily test fertility 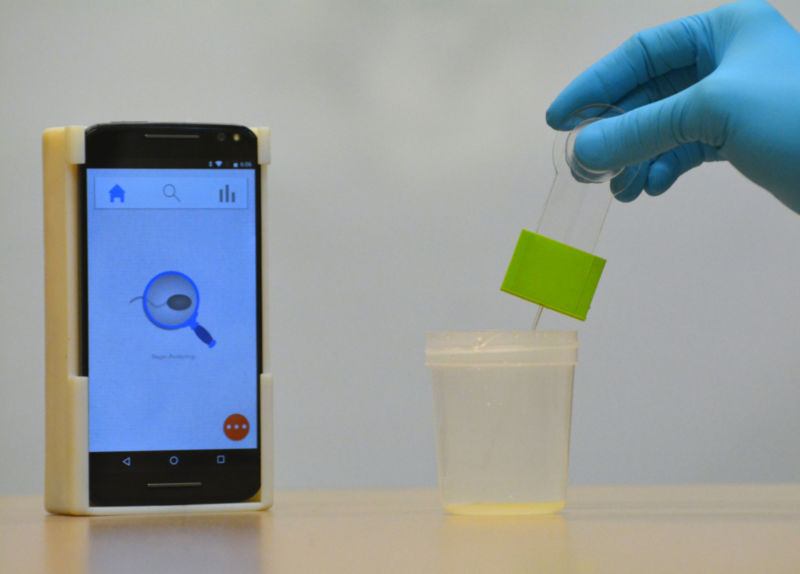 Enlarge / The smartphone-based semen analyzer tests for male infertility in seconds from the privacy ofhome with a 3D-printed setup costing less than $5, which can analyze most semen samples inless than 5 seconds. (credit: Vignesh Natarajan)

The male equivalent of the at-home pregnancy test may have just landed.

With a simple smartphone device and a chip that slurps up sperm, men can easily and cheaply measure the count and motility of their swimmers. The test is about 98 percent accurate, takes less than five seconds, and requires no training to run, Harvard researchers report Wednesday in Science Translational Medicine. It’s also cheap—the device and the microfluidic chip cost just $4.45 total to manufacture.

Researchers are hopeful that the invention will help couples trying to have children—as well as those trying not to. Worldwide, it's estimated that more than 30 million men face fertility issues at some point. And couples in developing countries or remote areas may not have easy access to fertility clinics. On the flip side, those who undergo vasectomies are encouraged to monitor their sperm counts afterward to make sure the procedure worked. A simple, mobile phone-based test could help both groups.