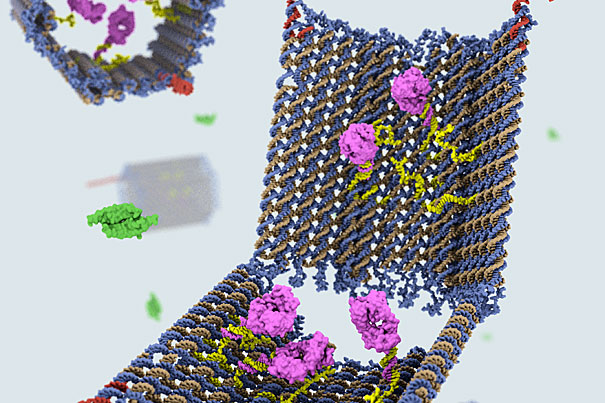 DNA robots crawl across a surface made of DNA.
Harvard

DNA-based nanotechnology has been around for more than 30 years, but it really took off in 2006, when DNA origami was featured on the cover of Nature. This form of origami, the folding of DNA into 2D and 3D shapes, was more of an art form back then, but scientists are now using the approach to construct nanoscale robots.

The basic principle of DNA origami is that a long, single-stranded DNA molecule will fold into a predefined shape through the base-pairing of short segments called staples. All that’s required is to ensure that each staple can find a complementary match to base-pair with at the right location elsewhere in the molecule. This approach can be used to create both 2D and 3D structures.

The idea behind the new work is that a DNA origami robot can be programmed to have a specific function based on a key, which can be a protein, a drug, or even another robot. Once the right key and the right robot find each other, the key drives a conformational (structural) change in the robot. The new shape causes the robot to perform a programmed function, such as releasing a drug.