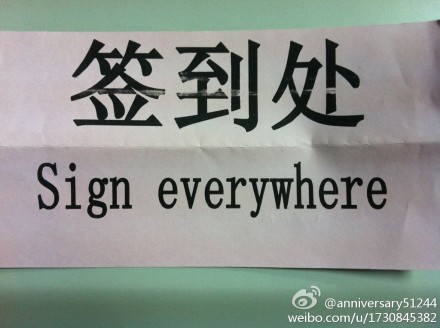 As it appears on the sign, the translator must have parsed the three characters 签到处 as qiān dàochù, though the correct grammatical order and wording for "sign everywhere" would be dàochù qiānmíng 到处签名.

Instead, 签到处 should have been parsed as qiāndào chù, lit., "signing-in place", i.e., "sign-in desk" or "registration desk / department", as one might encounter at a conference or workshop.

The erroneous rendering on the sign is taken directly from Google Translate.

This is a good example of how Pinyin (Romanization) with proper word division is clearer than writing only in characters without any spacing. If this kind of misunderstanding is possible with only three characters (and it happens a lot in daily life), one can well imagine the types and quantity of reading errors that result from character texts that have no spaces at all (as in Classical Chinese) or only when marked by punctuation as in Modern Chinese.

[A tip of the hat to Gianni Wan]