This photograph was taken at the northern train station in Changchun, China: 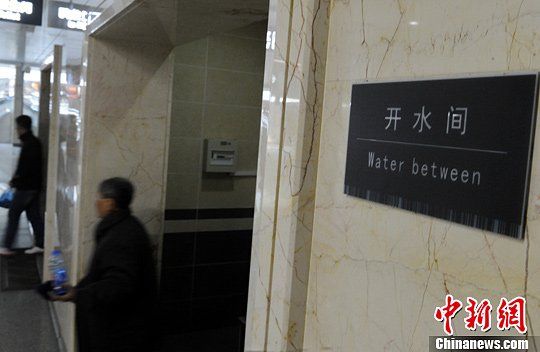 We recently encountered similar signs in "Opens the waterhouse; open water rooms", where the same kāishuǐ jiān 开水间 as here was translated as "open water rooms". Since we've already fully dissected that mistranslation and explained the cultural background behind the Chinese fondness for hot water, we know that the correct translation for kāishuǐ jiān 开水间 is something like "room for boiling water".

There's not much to add on this occasion, except to say that we see increasing evidence that, as the level of English overall rises, China's netizens themselves point out such errors and make suggestions for improvement, as here, where they offer as alternatives to "water between" the following: Water Heater Room、Boiler Room、Hot Water Room.

As to how "water between" came about in the first place, the translator simply paid no attention to kāi 开 ("open; boil; start", and many other diverse meanings), while they chose the wrong meaning of jiān 間 ("between; among; within a certain space; room; separate; divide").