I wanted to share two photos with examples of Japlish. One appears to be the result of a quirky machine translation. 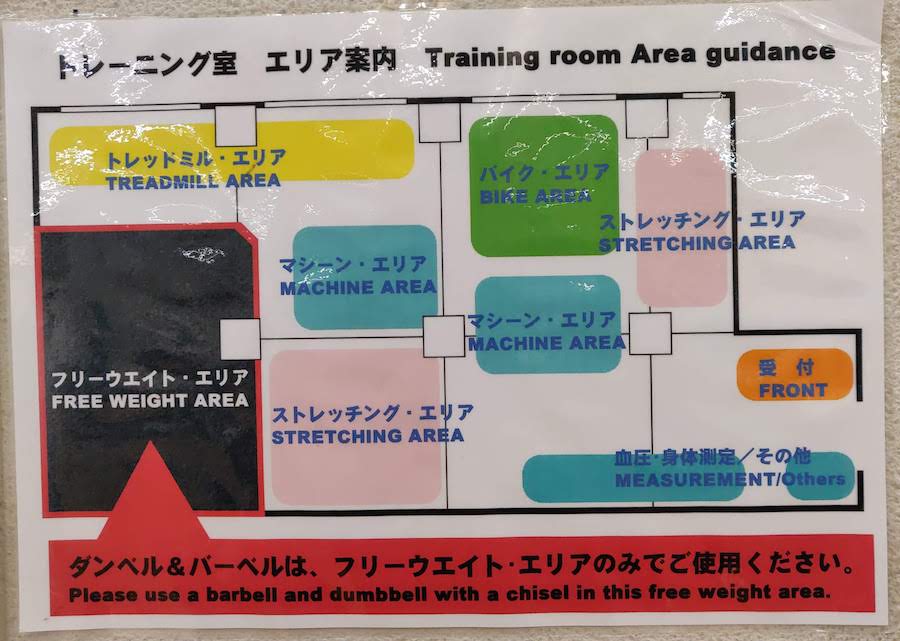 That's the "Training room area guidelines" from the municipal sports center near my home (the only gym I can afford on my salary). The offending passage is at the bottom:

"Please use a barbell and a dumbell with a chisel in this free weight area."

This novel use of a carving and gouging implement struck me as perhaps not so much a curious aspect of inscrutable Oriental culture as instead the hallmark of machine translation gone facepalmingly awry. The original is:

The "nomi de" is the culprit. In its intended meaning, it is just "only," as in "Please only use the dumbbells and barbells in the free weight area." However, the particle de is the instrumental, and nomi, depending on orthography, can be any number of marvelous things.

Yes, chisel has a kanji (鑿), but because it's quite complicated and neither included in the 2100 or so jōyō ("regular-use") kanji that are taught in the public school curriculum and used as the publishing standard for newspapers, for example, nor commonly part of the life experience of most Japanese — at least after completing middle school art — it's almost never used. In fact, it didn't even come up as an option in my input window.

The second photo is courtesy of a high school friend who visited Tokyo for the first time recently. She texted me this menu with a question about the chicken section. Yes, only one. 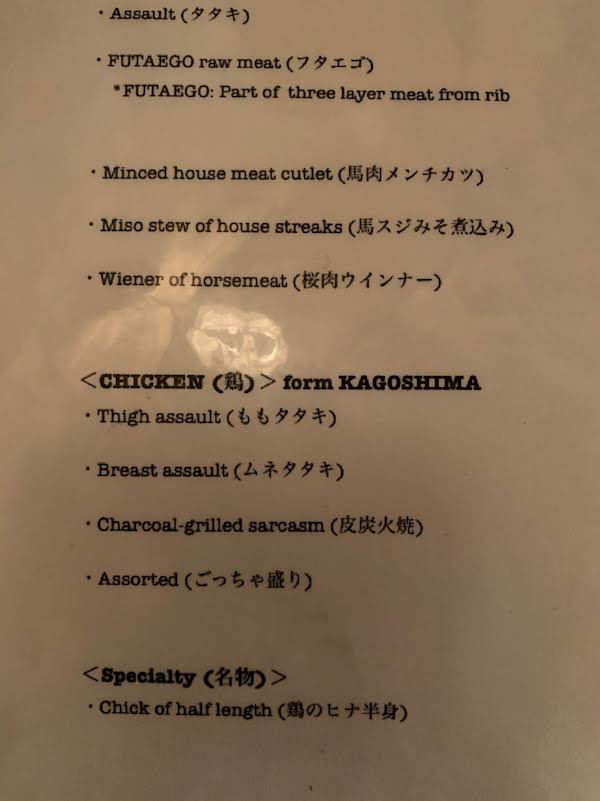 I was first struck (pardon the pun) by the many "assaults" on the menu. Japan is not known for the frequency of its violent crime, so this seemed a bit odd, particularly as an offering at a restaurant rather than an S&M club. As a culinary term, タタキ (from 叩く tataku, to beat) refers to one of two preparation techniques: 1) minced, 2) seared. I assume that in this case, it's most likely the latter, i.e., seared chicken, raw on the inside.

I wanted to just skip over the horse section altogether, especially since the horsemeat weiner jokes just write themselves and need no help from me whatsoever. However, it is worth noting two things here. First, "house streaks" should be "horse tendons" (馬スジ). "House" is a typo, "streaks" a mistranslation much like that of nomi above. I am told that in the world of omnivores and carnivores 筋 (suji) refers to Achilles tendon and/or other tendons and tendon-like meat byproducts. Beef suji are popular in stew; here, in a presumably upscale move, horse has been substituted. スジ also has numerous other meanings, abbreviated below from weblio.

Hardly difficult to choose the wrong one, given the one-in-nine odds if nothing else.

The one other notable thing about horse is that it is euphemistically referred to as 桜肉 (sakuraniku), "cherry (blossom) meat" for the sausage. I only find this odd inasmuch as the character for horse is used with no shame or pretense in the other two menu items.

BTW, boar (イノシシ) was referred to as 山鯨 (yamakujira,"mountain whale") during the Edo years in which meat eating was frowned upon.

Anyway, the crux of my friend's question was the "Charcoal-grilled sarcasm" in the offing.

Perhaps as a New Yorker she felt that she got enough burning sarcasm at home. Perhaps she was just curious or confused. In any case, it fell to me to explain that this was a sublime mistranslation of "charbroiled (chicken) skin."

adding the character for meat (niku) in the hopes of achieving some sort of clarity. The best laid plans, &c.

The problem is that the Japanese term for sarcasm (and, ironically, irony) is 皮肉 (hiniku). If I understand correctly, the older meanings of both "skin and meat" (both literally and in the meaning of the corporeal body) and kawaniku ("skin-meat," i.e., just the very surface pickings) were largely supplanted in the first half of the nineteenth century by the meaning of irony. The connection, I assume, is that one goes in expecting meat and gets only skin. (Or perhaps rain on one's wedding day, or a free ride having already paid, etc.)

It is sometimes remarked that the failure to fully distinguish between irony and sarcasm is, along with a peculiar lack of overt and colorful vulgarity, one of the peculiarities of Japanese. I'm not taking a stance on this, though it is somewhat remarkable. Then again, liberty and freedom are also conflated as jiyū (自由), but English uses words like sanction to mean literally its own opposite, not to mention literally to mean literally its own opposite, so I'm trying to remain pretty agnostic about linguistic singularity hypotheses.