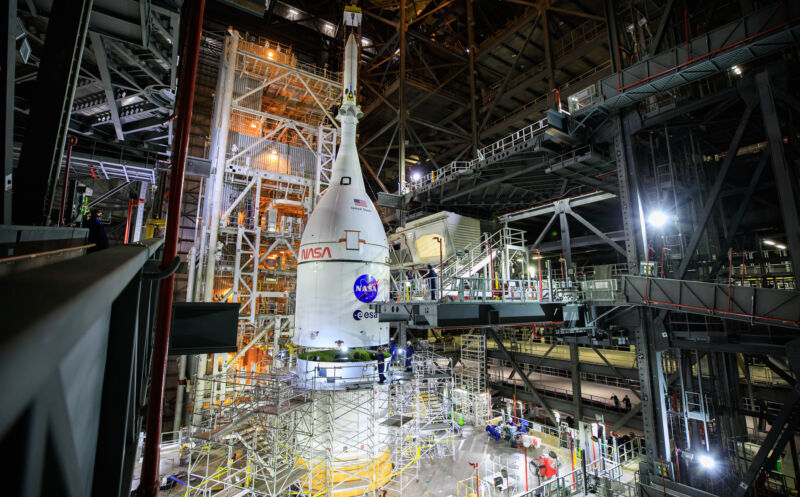 Enlarge / The Orion spacecraft for NASA’s Artemis I mission is lifted above the Space Launch System rocket in the Vehicle Assembly Building at Kennedy Space Center. (credit: NASA)

Last week NASA and its myriad contractors for the Space Launch System and Orion spacecraft reached a significant milestone—creating a full stack of the rocket and deep-space capsule for the first time. The completed launch vehicle stands an impressive 98 meters (321 feet) tall inside the Vehicle Assembly Building at Kennedy Space Center.

Although technicians and engineers still must put the rocket and spacecraft through a series of tests in the coming months, for the first time the agency discussed a possible launch window for the Artemis I mission. This launch, sending an uncrewed Orion spacecraft into orbit around the Moon and back, could happen as soon as a 15-day window from February 12 through 27.

Much, and more, has to go right for NASA to make that launch window. So it's likely the Artemis I launch will slip further into the spring of next year. If serious technical issues are discovered, of course, the launch date could be delayed further. During a news briefing with reporters on Friday, launch officials reiterated several times that the rocket would not launch until the hardware was ready.