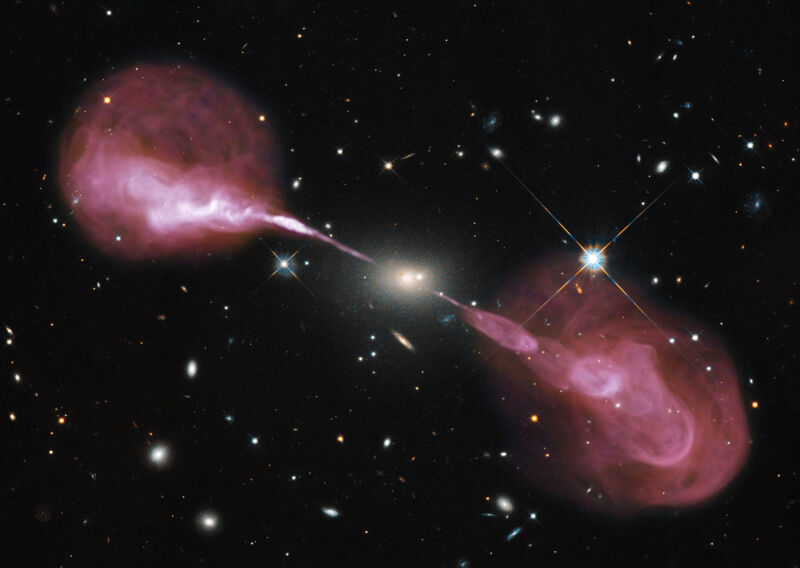 Enlarge / The jets of material ejected from around black holes can be enormous. (credit: NASA, ESA)

Active galactic nuclei, powered by the supermassive black holes they contain, are the brightest objects in the Universe. The light originates from jets of material hurled out at nearly the speed of light by the environment around the black hole. In most cases, these active galactic nuclei are called quasars. But, in rare instances where one of the jets is oriented directly toward Earth, they're called a blazar and appear brighter.

While the general outline of how a blazar operates has been worked out, several details remain poorly understood, including how the fast-moving material generates so much light. Now, researchers have turned a new space-based observatory called the Imaging X-ray Polarimetry Explorer (IXPE) toward one of the brightest blazars in the sky. The data from it and other observations combined indicate that light is produced when the black hole jets slam into slower-moving materials.

The IXPE specializes in detecting the polarization of high-energy photons—the orientation of the wiggles in the light's electric field. Polarization information can tell us something about the processes that created the photons. For example, photons that originate in a turbulent environment will have an essentially random polarization, while a more structured environment will tend to produce photons with a limited range of polarizations. Light that passes through material or magnetic fields can also have its polarization altered.