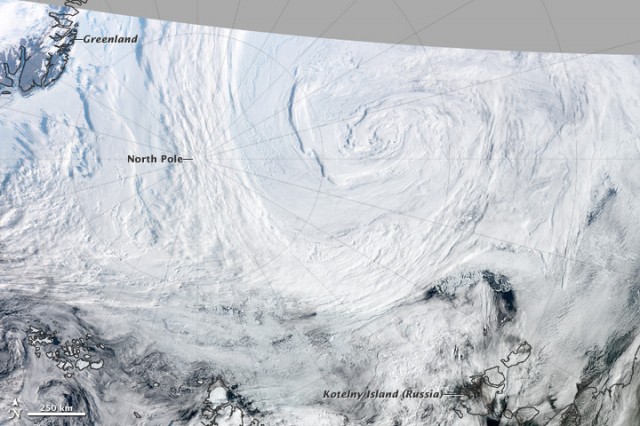 The Great Arctic Cyclone of 2012 churns its way towards the North Pole.
NASA

This summer saw a new record low in the ice covering the Arctic Ocean, with levels bottoming out well below those seen in 2007, the previous low year. A major contributor to that drop was an unusual summer cyclone, which parked over the pole for several days in the course of its nearly two-week long existence. Researchers from Australia have now run the numbers on the storm, and found that it really does deserve the moniker "great Arctic cyclone." But they also conclude that the storm wasn't fueled by the unusually open ocean beneath it.

The storm was hard to miss in satellite imagery such as the example shown above, but its full history wasn't necessarily obvious. So, the authors of the new study downloaded atmospheric data and plugged it into an atmospheric model that specializes in identifying cyclonic systems. They were able to detect the first indication of the storm over Siberia on the 2nd of August. But it really got going once it entered the Arctic basin on the 4th; by the 6th, the eye of the storm had reached its lowest pressure. The very next day, it took a slight detour and hovered over the Pole for several days before heading south over Canada and finally dissipating on the 14th.

A notable thing about the storm is that it did not seem to involve a large redistribution of atmospheric heat content. Storms like hurricanes famously take the energy from warm surface waters and redistribute it to the atmosphere. But readings from the Arctic Cyclone showed that the heat flux was small for most of its history. This suggests that the storm wasn't powered by the ocean below it, which in turn indicates that the loss of ice wasn't a factor in driving the storm's unusual strength. As the authors put it, "This leads to the view that it was the enhanced influence of the cyclone which contributed to the reduction in ice area, rather than low sea ice area being responsible for releasing energy to maintain the system."