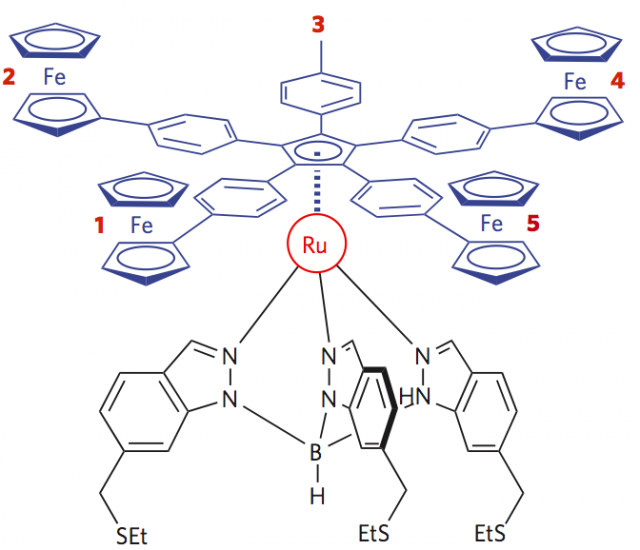 The base of the device holds a Ru atom, and the five-armed device can rotate on top of it.
Image from Perera et. al., Nature Nanotechnology

For some time now, researchers have been managing to craft ever-smaller devices, though they're approaching the problem from two directions. Some researchers are etching small features into chips to carve out nanoscale versions of familiar devices. But others are taking advantage of our ability to synthesize and interact with individual molecules to create systems that are only a few dozen atoms across. And, in many cases, these single-molecule devices look disturbingly like their full-scale counterparts.

When last we left single-molecule motors, they were four wheeling across a sheet of copper, powered by electrons fed in by an atomic force microscope. In the latest iteration, researchers have managed to create a reversible rotor that sits atop a ball bearing—but in this case, the bearing is a single ruthenium atom.

Again, the tricky part comes in building the molecules required. The base of the system involves a boron atoms that coordinates three ringed structures that are chemically similar to the bases of DNA. Nitrogens at a corner of these ringed structures coordinate the ruthenium atom, placing it at the peak of a three-sided pyramid. (This compound has the succinct name [n5-1-(4- tolyl )-2,3,4,5-tetra(4-ferrocenylphenyl) cyclopentadienyl hydrotris [6-((ethylsulphanyl)methyl)indazol-1-yl] borate ruthenium(II)], which should provide some sense of its complexity.)