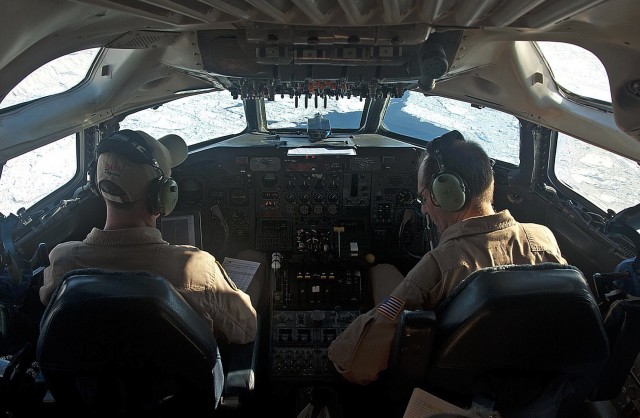 The view from the cockpit of NASA's DC-8 flying lab during an Operation IceBridge survey flight 500 meters above the Antarctic ice fields.
NASA

Mars and Antarctica have a lot in common—they're both cold, inhospitable places with terrible broadband service. The crew of Operation IceBridge, NASA's airborne survey of glaciers and ice shelves in the Arctic and Antarctic works with networking constraints similar to those of the Curiosity rover, keeping in contact with its ground crew at worse-than-dialup speeds using the lowest-bandwidth method possible: Internet Relay Chat.

In February of 2010, after seven years of operation, the final laser sensor on NASA's Ice, Cloud, and Land Elevation Satellite (ICEsat) failed. With its replacement not slotted to be launched until 2015, NASA launched Operation Ice Bridge to conduct aerial surveys to fill in the gap. Flying 500 meters above the surface in a precisely-planned pattern over the Antarctic ice sheets, the OIB aircraft—operated by the National Suborbital Education and Research Center at the University of North Dakota—carries ice-penetrating radar, a gravimeter for measuring variations in the density of the ice below, and an Airborne Topographic Mapper—a laser altimeter that combines GPS data with laser measurements to build a precise record of the elevation of the ice sheets.

But because of the poor satellite coverage in the Antarctic, the refitted vintage Douglas DC-8 airliner can't use the Inmarsat BGAN service it normally uses for voice and data communication channels. "Like most high bandwidth satellite systems, the constellation is in geosynchronous orbit," David Van Gilst, NSERC's network engineer, told Ars in an e-mail interview. "So once you get past 72-73 degrees latitude the satellites are so low in the sky as to be problematic. Past 80 degrees latitude, they're below the horizon."