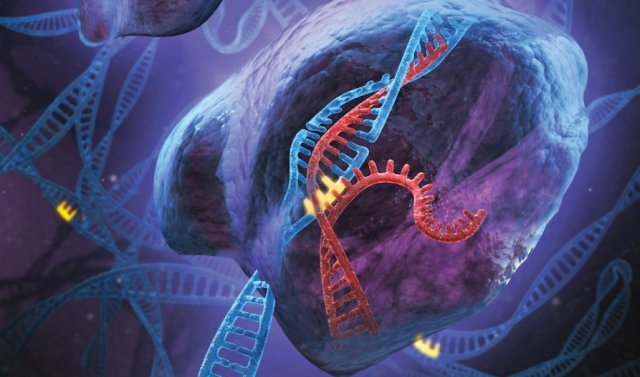 Artist's conception of the CRISPR system in action, with the guide RNA (red) leading a protein to a specific site in the genomic DNA (blue) where it makes a cut.
Stephen Dixon and Feng Zhang

Precisely engineering the genome of human cells remains largely in the realm of science fiction. It's possible, with the right virus, to get new or modified genes into cells. But the regular collection of the genes in the cell are still there—we can't typically eliminate a gene that has gone bad or replace a broken copy with a working one. Although some progress has been made in creating proteins that target specific spots in the genome, it's tough to make these proteins both specific enough to only target a single sequence yet flexible enough to work on lots of targets.

Now, it turns out we don't have to make proteins after all. Bacteria have a system that targets the DNA of viral invaders, acting a bit like an immune system. And two teams of researchers have shown it's possible to direct that system so it targets specific locations in a mammalian genome. Once targeted, the cell's normal DNA repair system can replace the sequence with an engineered one of the researchers' choosing.

The efficiency is under 10 percent, so don't start thinking we're going to edit every cell of the human body. But that rate still makes it practical for a variety of purposes—and potentially even therapies.