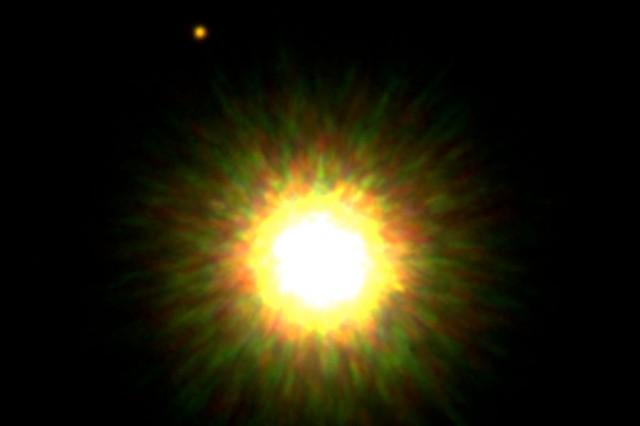 A young, Sun-like star with a planetary companion.
NASA

Although life seems to have gotten a quick start on it, the early Earth was a nasty place. Very early on (and perhaps again later), meteors frequently peppered the surface. The atmosphere contained no oxygen, and consequently no ozone, to shield the surface from UV radiation. To top it off, the juvenile Sun burned about 25 percent less brightly than it does today, which should have put the average surface temperature below the freezing point of water.

Except it wasn't. Geological evidence indicates plentiful liquid oceans were present soon after the Earth’s formation, and the first one and a half billion years showed no signs of glaciation. This puzzle, dubbed the “faint young Sun paradox,” was recognized by Carl Sagan and George Mullen in 1972.

Various factors have been proposed to resolve the paradox. Some have suggested that the Earth was less reflective—due to a paucity of continental land area and decreased cloud cover—allowing it to absorb more incoming sunlight. Other answers have focused on greenhouse gases. A lot of effort has gone into investigating how much CO2 and methane were present, and researchers have proposed other, more exotic greenhouse gasses, like carbonyl sulfide (OCS) might have been present. The atmosphere was likely denser, which would enhance the effectiveness of greenhouse gases.