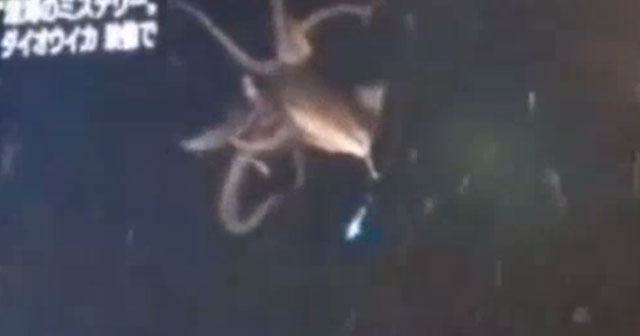 One of the most mysterious denizens of the deep ocean has finally been caught on video. Four hundred hours of tracking using a submersible vehicle have culminated in the first-ever video footage of a live giant squid, shot in the Pacific Ocean about 620 miles south of Tokyo.

The squid in question is actually a bit of a small fry, measuring just about 10 feet long (adult females can grow up to 43 feet long). Given that almost all of what we know about the giant cephalopods comes from specimens that have washed up on beaches or been extracted from the stomachs of sperm whales, the video is generating a lot of excitement.

"I've seen a lot of giant squid specimens in my time, but mainly those hauled out of the ocean. This was the first time for me to see with my own eyes a giant squid swimming," zoologist and expedition leader Tsunemi Kubodera told Reuters. "It was stunning, I couldn't have dreamt that it would be so beautiful. It was such a wonderful creature."