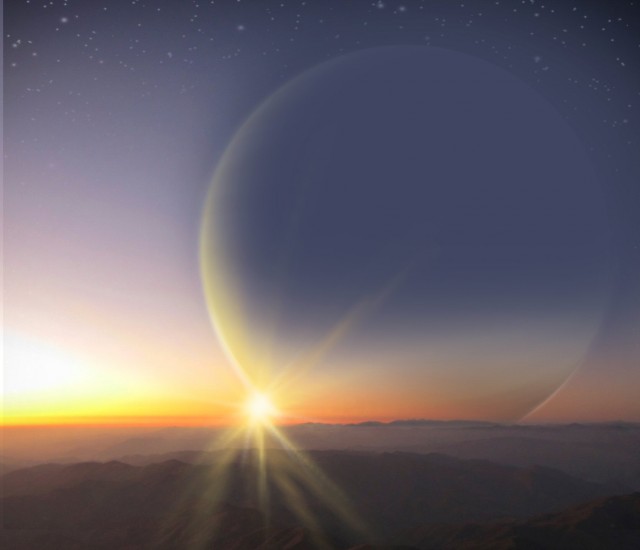 An artist's rendering of what star-rise might look like from the surface of a moon orbiting the giant planet PH2b.
Haven Giguere

It's distinctly possible that the first truly Earth-like planet in another star system will be discovered by a non-scientist.

Well, that's not quite true: the process of discovery is more complicated than that. However, volunteers working with exoplanet data from NASA's Kepler telescope recently identified 42 planet candidates orbiting relatively nearby stars. Of those, 20 potentially lie within the habitable zone of their systems, meaning the basic conditions could be right for liquid surface water. One of these worlds, known as PH2 b, is definitely a Jupiter-sized planet clearly within its star's habitable zone. While the planet itself is unlikely to harbor conditions suitable for life, perhaps it has moons that would.

These volunteers were from Planet Hunters, part of the Zooniverse family of citizen science projects. Several Zooniverse efforts have yielded a number of scientific papers, proving that real science can arise from crowdsourcing. The latest Planet Hunter paper, which will be published in the highly-ranked Astrophysical Journal, credited more than 40 citizen scientists, a collaboration that does credit both to them and to the professional scientists they worked with.